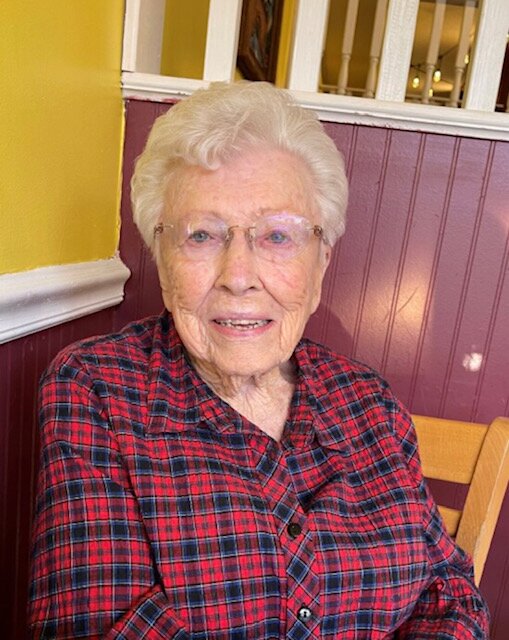 Charlie and Lena Rothans welcomed their new baby girl Mildred Irene into the world on December 27, 1923 on the family farm in Monroe, South Dakota. She joined her brother Clarence and sister Neva. Several years later Arnold was born to make their family complete. During her high school years, she met Allen Graber, a country school teacher whom she wed in 1942 in Yuma, Arizona. They made their first home in Hawthorne, California. She worked at Southland Blinds making deliveries and then at Northrop Aircraft as a riveter until it was time to raise her family. She loved being a homemaker. She worked many hours supporting school activities and working with the Rosary Guild in Sacred Heart Parish. Her joy was raising desert turtles. One of her turtles was over 100 years old. She is affectionately called Grandma Turtle by her Grandson Ian’s family. She was a resident of Lancaster, California for over 60 years. She was preceded in death by her parents and her beloved husband, her sister and brothers, sister in laws, brother in laws, her nephews, nieces, great niece’s great nephews as well as many friends. She is survived by her daughter Bonnie Gross (Wayne)of York, SC and her son Michael Graber (Ruth)Tehachapi, Ca. her grandsons Ian Graber (Marlee)of Palmdale Ca., Justin Graber of Los Angeles and Casey Graber of Spokane, WA, her granddaughter Alaina Witt (Carter) of Charlotte NC, great grandchildren and nieces and nephews she often lovingly claimed as her own. Rosary Service will be held at Sacred Heart Catholic Church, 565 W Kettering St, Lancaster, CA, June 15 at 1:30 pm followed by Funeral Mass at 2:00 pm. Burial will be in Good Shepard Catholic Cemetery. In lieu of flowers, memorials may be made to the St. Jude Children's Research Hospital, 501 St. Jude Place, Memphis, TN 38105 www.stjude.org M. L. Ford & Sons Funeral Home, Clover, SC and Valley of Peace, 44901 10th Street West, Lancaster, CA is serving the family of Mrs. Graber.
Share Your Memory of
Mildred
Upload Your Memory View All Memories
Be the first to upload a memory!
Share A Memory