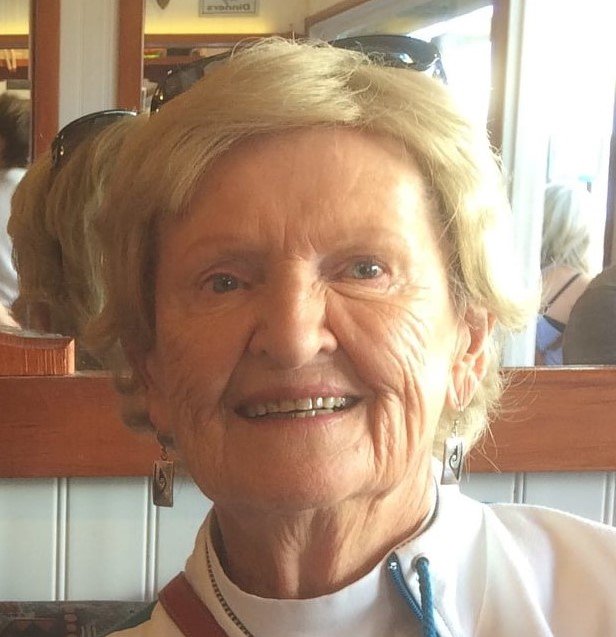 Joyce Cochran, beloved mother, aunt, grandmother and great-grandmother, passed away peacefully on Tuesday, April 6 at the age of 99. Joyce was born October 16, 1921 in Glens Falls, New York to Emma (Owens) and Stuart Hawley. She was raised along with her younger brother Charles in Lake George, a beautiful resort town in the Adirondack mountains of upstate New York, a place she returned to frequently throughout her life to visit family. She attended Syracuse University and graduated cum laude from the College of Business Administration in 1942. After college, she worked at General Electric in Schenectady, NY where she met her future husband, Kenneth Cochran. She also worked for a short time in Washington D.C. for the State Department. Joyce and Ken were married in August 1946 in Lake George and immediately left on a remarkable cross-country journey pulling a trailer to Berkeley, CA where Ken would do graduate work at Cal. They soon returned to New York where their first child, Joan, was born when they were living on Long Island. They moved back to California for good a couple years later, settling in Southern California in the Westchester area where four more children (Anne, Nancy, John and Steve) were soon to arrive. They moved to Playa Del Rey in 1964 and to Tarzana in 1971 where they lived until moving to the retirement community at University Village in Thousand Oaks in 2008. Despite a busy family life, Joyce found time for lots of travel and volunteer work. She learned American Sign Language and for a time did tours for the deaf at the LA County Museum of Art. In the late 70’s, she launched a successful career as a real estate agent which she pursued until her retirement. Joyce and Ken were enthusiastic travelers. In addition to countless trips within the U.S., they traveled extensively in Europe (England, Ireland, Scotland, France, Germany, Belgium, Italy, Turkey, Greece, Spain, Portugal), Asia (China, Hong Kong, Japan, Thailand, Bali), Kenya, Mexico, Canada, Australia and New Zealand. Joyce was a voracious reader her whole life, loved jazz and classical music, and art of all kinds. Joyce stayed remarkably sharp, active and independent until health issues necessitated a move to the skilled nursing facility at Oakview three years ago. The last three years, as her memory slowly faded, she still remained herself, continuing to read many books and her daily paper until fairly recently. She took great joy from visitors, none more than her five great-grandchildren. Do not be sad for her passing. Joyce lived a long and active life, full of family, travel, arts & literature. She never lost her thirst to learn new things, visit new places and meet new people. But she was ready to go. Be happy for her. Joyce was preceded in death by her husband, Ken, her brother Charles Hawley and his wife Ruth, and her daughter, Anne Magoon. Joyce is survived by her children: Joan Cochran and Nancy Cochran of Seattle, WA., John Cochran and his wife, Pam Frankel of Moorpark, and Steve Cochran of Torrance; Son-in-law: Steve Magoon; Grandchildren: Karen Magoon Pearson and her husband Jonathan, Laura Vargas and her husband James, Christopher Cochran and his wife, Katrina Bouza, and Ian Cochran; Great-Grandchildren: Jayden, Derek, Dominic and Julian Magoon Pearson and Benjamin Vargas; and her nieces and nephews: Betsy Cochran, Cynthia Cochran-Carney, Pam Dudgeon, Chris Hawley, Nancy Hawley and Sally Hawley. The family would like to thank the staff and nurses at Oakview who have done a phenomenal job taking care of Mom, and all of their patients, especially during this last trying year. Donations in Joyce’s memory can be made to Feeding America (www.feedingamerica.org).
Share Your Memory of
Joyce
Upload Your Memory View All Memories
Be the first to upload a memory!
Share A Memory