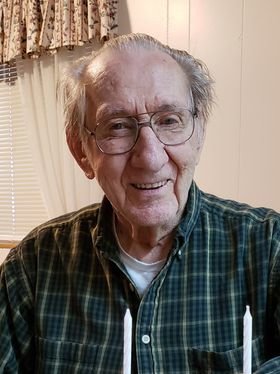 Paul H. Volkl Paul Henry Volkl, 88, a lifetime trucker and a longtime resident of Lancaster, California passed away peacefully on the evening of Tuesday, November 3, 2020. Valley of Peace Cremation & Burial of Lancaster, California is handling the arrangements. Online condolences may be directed to their website https://valleyofpeace.net under obituaries and tributes. A private burial will be held at a later date. Paul was born on April 29, 1932 in St. Libory, Nebraska to Henry and Marie (Suehlsen) Volkl. He was the first born of three children. He was raised and attended high school in St. Libory. Paul proudly served four years in the US Army & Army Reserves. He headed out to California in 1963 for better employment opportunities and lived in the Santa Clarita Valley. He married Donna Jean Gouldie on November 3, 1967 in Carson City, Nevada. She preceded him in death on August 5, 1987. He was an owner/operator and drove for Apex Trucking for many years. Then in 1991, Paul rekindled a relationship with Myrtle (Dumont) Reimers, whom he was engaged to in 1962 in Nebraska. They were married on July 27, 1991 in Las Vegas, Nevada and lived in Lancaster, California. They brought out the best in one another. After many years of driving truck, he hung up his keys, retiring in 2012 and enjoying his prime years with his wife, friends, family, and their doggy, Lucky. Paul was preceded in death by his parents; his brother, Leo Volkl; his brother-in-law, Gene Greenwalt; his sister-in-law, JoAnn Volkl; his grand daughter, Amanda Bragdon, earlier this year; and a nephew, William Volkl. Paul was survived by his wife, Myrtle Volkl of Lancaster, California; his sister, Helen Greenwalt of St. Libory, Nebraska; four daughters, Karen Upton of Lake Havasu, Arizona; Dianna Bragdon of Newhall, California; Patricia Jones-Bragdon of Agua Dulce, California; and Karla Archuleta of Palmdale, California; one step son, Bryan Reimers of Grand Island, Nebraska; his many grandchildren that he loved and cherished dearly: Harry- Upton, Steven Upton, Kari LeWay, David Upton, Vanessa Villalovos, Chelsea Bragdon, Jason Bragdon, James Archuleta, George Archuleta, Alyssa Archuleta, John Archuleta, Alana Archuleta, Joey Archuleta and Jamie Miller; several nieces and nephews, and many good friends.
Share Your Memory of
Paul
Upload Your Memory View All Memories
Be the first to upload a memory!
Share A Memory